I am pleased to tell you that I got a reply to the above within a month from Ikram (Correspondence Officer at No.10) enclosing a stock thank you letter from Boris. Sadly both were in English!

Once again I am in Aqaba,  this time bringing teddy bears and balloons for the Syrian refugee children and writing a book on mental health and spirituality for SPCK.  I leave on Wednesday morning back to Amman and on to London with Royal Jordanian Airlines. 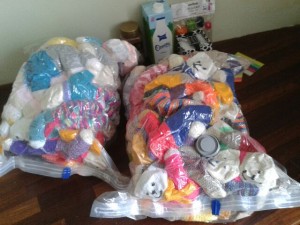 Layali tells me that you are here in Aqaba,  so I am making one more effort to reach you with the letters I have written to you over previous visits.  It would be good to meet you;  if not here this time, perhaps back in London – my contact details are shown above.

So,  enclosed once more are copies of the words previously sent concerning your father, Jordan and other matters together with an information leaflet of the little charity I chair in  the United Kingdom,

This letter was collected from the hotel by a King’s messenger but sadly one has to say now :

May I add a personal plea to the growing opposition to your proposed legislation regarding Community Supervision Orders. I trust you will recall my name, I am Carole Ingram’s brother and we exchanged correspondence at the beginning of 1992.

You will be aware of the anger felt by users of psychiatric services at these proposals through your meetings with Peter Campbell ( Survivors Speak Out ) , Edna Conlan O.B.E. ( United Kingdom Advocacy Network ) and others. National MIND, its local associations and many other respected bodies will have impressed upon you their feeling that the existing law is perfectly adequate to deal with so-called dangerous schizophrenics wreaking mayhem while out ‘in the community’. The framework of care and control is in place, it is merely the implementation and monitoring of that framework that requires your attention.

To me and others the CSOs represent just another sword of Damocles poised above the heads of people with mental disabilities whose rights are already atrophied. Do you wish to be remembered as the woman who drove another draconian nail into the lives of the mentally distressed ?

St. Peter awaits at those gates – I urge you to reconsider your actions. U-turns are better than bad turns,

I am writing in response to your letter of 18 May 1992. I am sorry that you were not happy with all the points made in my previous reply to you.  I understand, however, that when you last attended the outpatient clinic Dr Gundy went through your case notes with you and answered all your queries on medication.

Whilst I note your praise of certain staff on Bluebell Ward, and will pass your comments on, I feel that we have already investigated your complaints thoroughly and that I have nothing further to add.

Dr Gundy has assured me that he would be happy to discuss the question of your medication with you again at your next appointment should you so wish.

I have asked for the additional points you have raised to be looked into and will reply more fully as soon as possible.

You will see from the enclosed correspondence that I have been trying to reach you for some time – I am merely a humble British citizen and wanted to inform you of your father’s generosity. My last letter was handed to Layali who promised me she would hand it to you personally within days but, as it turned out, sat on it (ouch !) undelivered for the past 3½ months. So I try again.

Once more I near the end of a delightful holiday in Aqaba. I learnt from the Anglican curate here, Adam Boulter, that some while back there was a scandal involving abuse in a care home and that you personally went there to ‘read them the riot act’ – great stuff.

All of us in England were aghast at the appalling end for your Jordanian Air Force pilot captured by those dregs of inhumanity. Should matters deteriorate on your borders with Syria and Iraq do not hesitate to request help (should you need it) from Cameron – I am sure that the S.A.S. at least would relish the opportunity to assist your own forces.

The winter/spring climate here is splendid and I hope to return next time with my girlfriend, who incidentally advises me to ” … leave that King alone !”. One wonders if Aqaba and its people might benefit from more British tourists ? Direct flights from the likes of EasyJet or even the previously dreadful Ryanair could perhaps benefit the economy.

Please do glance at my charity’s latest leaflet.

I wrote to you over a year ago and posted the letter at the main Madaba Post Office. The postcards I sent at the same time took 5 or 6 weeks to arrive in the U.K. so perhaps my letter never reached you at the Hashemite Palace – I have enclosed a copy – my sentiments regarding Jordan and Jordanians remain unchanged.

Once again I near the end of a delightful holiday – this time I have hardly moved from the excellent facilities provided at the Mövenpick, Aqaba. Indeed this letter, written on notepaper recently sourced from Zubboli’s on the central square of Assisi, comes to you courtesy of Layali, the communications manager here and a friend of the Mövenpick’s concierge, Omar Malkawi.

I have taken the liberty of also enclosing a leaflet of the little charity of which I am Chairman – we do good work among people in mental distress. Perhaps you know people in England who would be interested … our newsletters appear on our website www.beingalongside.org.uk. At present we have very few overseas subscribers.

One wonders whether Colonel Tim Checketts was your commanding officer at Sandhurst ? He is now the Secretary at Royal St. George’s Golf Club where I play – a good man, who sadly lost his wife to cancer a couple of years ago but who has found happiness again.

Thank you again, sir, for the warmth and hospitality shown by your people. I am sure I will return soon, The translation below was not sent to Boris. He just received the Latin version. 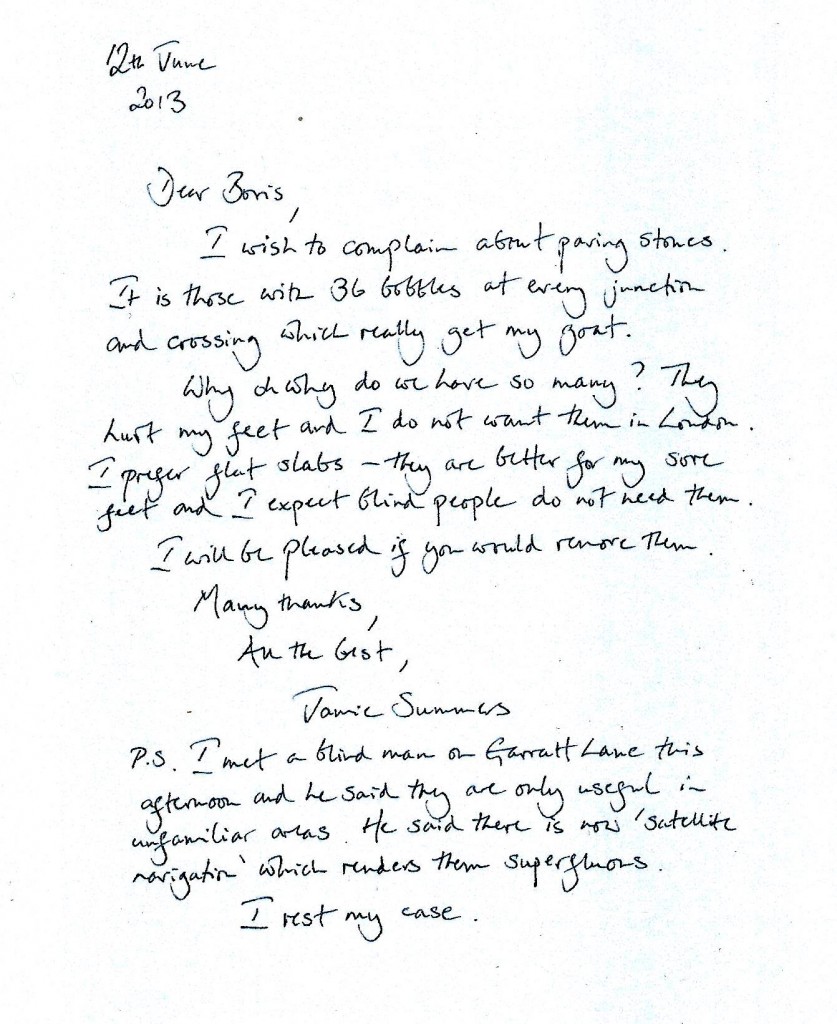 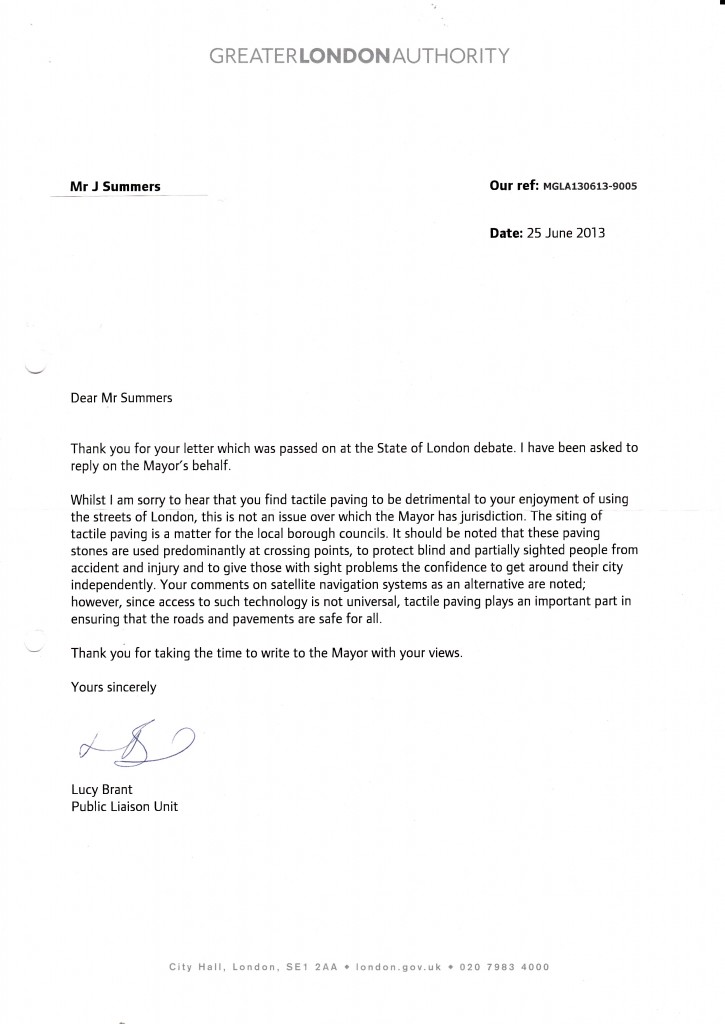 Thank you for your letter dated 25th June 2013 concerning my complaint about ‘tactile paving’.  A minor pedantic gripe would be that you didn’t post it until 1st July and then it failed to arrive until 4th July  – however, hypocrisy rules because here I am waiting until 21st July to pen a response !

Of course my letter to Boris was partly ‘tongue-in-cheek’ to put a smile on his face, but there again I did mean what I said.  Your reply was measured (albeit sadly not in Latin) and well crafted.  I fear we are stuck with these impedimenta – to replace them them all would be a cost and effort too far.

Wishing you every success in your career, We were exact contempories at Oxford back in the early Seventies – while you were strumming away with ‘Ugly Rumours’ at St. John’s I was playing golf every day,  not attending lectures and doing typical ‘studenty’ things at Christ Church. You will probably remember kind Barry Wild at St. John’s who was in the golf side with me, but one or two years older than us. END_OF_DOCUMENT_TOKEN_TO_BE_REPLACED

I am on my last day of a 12 day holiday in your country where I have not been before – my education has been lacking.  It is good to see the devotion that the people have for the Hashemite monarchy – if only your UK counterparts were so lucky !  Many years ago, I had the honour of meeting your father who was staying in the Chilterns with friends of my family, the Streets. This must have been several years before you were even thought of.

Furthermore, I was friends with a lovely couple, Jamie and Liz Cork in the early eighties in London. One of them, I cannot recall which, was your father’s Godchild and as a wedding present he gave them a Mercedes 250SL – how marvellous.

Apologies for the sycophancy but I have been to probably 120 countries around the world and your’s ranks very high in my estimation. People have been charming to me, even your traffic police keep saying, “ Welcome to Jordan “ when I pull up at their checkpoints. Obviously amongst archaeological extravagancies, Petra reigns supreme but some of the lesser known and thus less trampled sites have been superb . Umm Qais (Gadara) was in its way more special than Jerash and the mosaics at Umm ar-Rasas dare one say it finer than those in Madaba – at both places I was virtually the only tourist.

I have made so many new friends and will embarrass them in writing their names, well just a few of them anyway …

Billal at his souvenir shop at the circled entrance at Petra.

The gap-toothed Bedouin boy with his excellent English, trying to sell me his bracelets on the way back from the Siq.

All the staff at the Petra Moon Hotel.

Waleed, the bell-boy at the Days Inn in Aqaba.

Mohammed, night duty manager there – a fan of this notepaper !

Fares, the perfumier in Aqaba.

And perhaps last but by no means least at his Al-Anoud jewellery shop in Madaba, Anwar Al-Rayyan, Special Forces Commander in the Jordanian Army 1967 and 1973.

+ others too numerous to mention.

I leave on the EasyJet back to Gatwick this evening as you tussle with John Kerry and Mahmoud Abbas in efforts to find an accommodating peace in Palestine where my parents both worked during WW2 occupying a flat in the American Colony in Jerusalem. May power come to your elbow, Sir.

Just a few pedantic little gripes about matters trivial.  Signposting is attrocious !  Many times I have followed signs to Aqaba say before they then disappear making it very hard for a non-local to find the right road. Also dismaying and annoying is the defacing of road signs, often to important sites, by fly-posting maniacs who cover entire signs obscuring any chance of seeing whether one needs to go left, right or straight on. Infuriating.

Littering is endemic – no one seems to care for their environment. Boxes, bags, cigarette ends, paper is thrown willy-nilly from cars and pedestrians alike. Such a shame for a beautiful country to look so messy and rubbish-strewn.  Any chance of instilling a little civic pride among your citizens ?

Lastly one worries about the tragically high death rate on the roads – your people drive appallingly, with cavalier selfish attitudes – no indication, no seatbelts (why ?), children roaming about the front and back of vehicles, everyone using their mobile phones while driving, parking skills absent, overtaking & undertaking efforts lamentable … the list goes on.

However, many thanks again for all your people’s hospitality over the past few days.  I shall return soon I hope,