At the suggestion of a friend whose father commanded the Gurkhas in WW2 and after talking to the U.K. head of the Gurkha Welfare Trust who kindly put me in touch with several people on the ground I decided to visit this lovely little country where I hadn’t been for 36 years.  “What can an individual do to help ? “, many said, ” you’ll just get in the way”,  with several disparaging comments from others who enjoy trying to wound me.  Nevertheless, I ignored my gainsayers and went anyway.

Armed with the latest Lonely Planet publication, Sainsbury’s instant coffee and tonic, a mini kettle, a litre of Jersey milk cosseted by freezer packs, plenty of music but sadly the wrong sized bath-plug my Oman Air flight circled above Kathmandu airport on the afternoon of Tuesday 12th May while they checked the runway after the second big 7.4 quake. 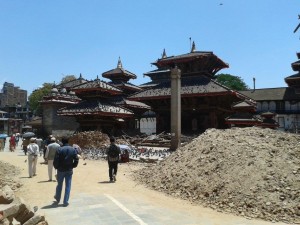 There was mild chaos near the terminal with stacks of aid awaiting delivery into the hills and a long wait for our luggage but I made friends with a charming Nepali family returning from their second home up in the Swat Valley in northern Pakistan and two young guys from Hands Charity Karachi here to do good work.  A short taxi ride later through streets thronged with people ( too scared to stay indoors ) and I am ensconced at the relatively luxurious Hotel Annapurna on Durbar Marg albeit with no hot water, lifts or working pool. There appeared to be only limited damage to these newer sections of town but all shops and restaurants were closed because of the tremors. Luckily I had brought out some home-made flapjacks and duty free Gilbey’s gin so my survival was not in doubt.

The following four days saw me touring the city and outlying towns Bhaktepur,  Patan,  Bangamati,  Dhulikel and Panauti by bus and on foot. Of these Bangamati was the worst affected ;  it reduced to rubble,  me reduced  to tears. 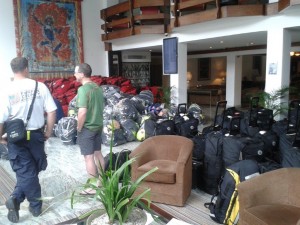 Dropping names here … my initial contact was the super-efficient ( and teetotal at least while on duty ) Defence Attaché Kathmandu, Colonel Sean Harris, who filled me in on the U.K.’s efforts to firstly deal with our citizens in distress and then the more needful Nepali people.  He and his 100 men were only able to do limited rescue work with their Land-Rovers because as it turned out, our wimp of a Prime Minister did not insist that the Nepalese Government accept the use of three Chinook helicopters which were poised to help in Delhi and wouldyabelieveit withdrew them back to the UK on my last day. They are still so needed – surely a call to the Nepal Ambassador in London could change attitudes? 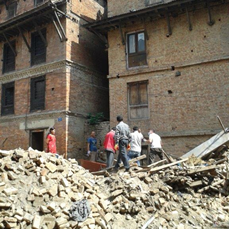 Anyway, Sean put me in touch with the Army Chaplain, one Rendell Day, ( running the United Mission to Nepal ) and he introduced me to a tiny Christian church, the Newa Mo:Mo in Thamel which looks after street children. I had spent a few quid in Poundland and Tiger before leaving and brought out DIY/gardening gloves, face-masks, anti-septic hand-wash and soap along with balloons, pens,booklets, crayons, candles, napkins and all sorts. About half of my stash I gave away amid great jollity at a Nepalese Army camp in central Kathmandu but I was able to leave many gifts for Anjana to distribute from her church. Surprisingly in a predominantly Buddhist country there are well over 500,000 Christians. 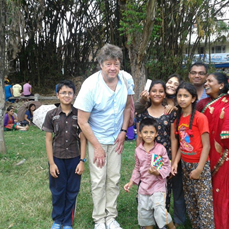 Of course I raided the hotel’s soaps, combs, toothbrushes and paste to dish out to people. I think the gloves were my most successful import because people were removing bricks and beams with their bare hands. Balloons ( starry ones from Sainsbury’s ) went down best with the children.  Working on the Starfish Principle ( Google it ) to bring a smile to maybe 350 people can’t be a waste of time. 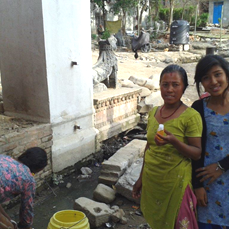 Different countries were bringing different approaches to ‘helping’ Nepal.  It was galling to see a 15 acre ‘field hospital’ with 30 immaculate khaki tents set up by the Pakistan Army outside Bkaktepur that was completely empty !  Disturbing too were the ubiquitous smart blue tents with windows provided by China but sparsely populated – they could pick and choose who they wanted to admit. These arrived without being requested by Nepal.  India too is playing political games – their media swamped the hills after the 25th April initial quake bringing not food and tents but just cameras and inane ” how are you feeling ? ” questions. I guess they have provided much canvas but it seemed to me the little Nepalese Army were doing more and with better grace.

The Yanks,  bless ’em,  sent 120 + firefighters from Fairfax County, Virginia and Los Angeles with sniffer dogs (all staying at the Annapurna) who were on 24 hour alert. There were 5 or 6 Huey helicopters at the airport on constant duty – do we criticize them for stopping operations for two days while they searched for one that crashed ?  Yes,  but with understanding. 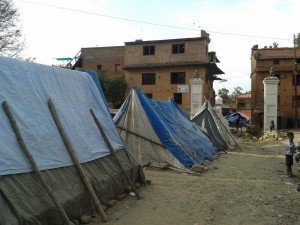 So much brilliant work was being undertaken by the NGOs and small organisations … the Salvation Army, Christian Aid, Tearfund, CAFOD,  the Gurkhas and richer local individuals.  I was somewhat appalled to read an article by Sarah Sands, the editor of the Evening Standard on Friday 22nd May making a snidy remark about Israeli help,  coming in without consultation,  she said.  Easier to pass judgement on them than the Chinese I suppose.  She cadged a ride in a tiny helicopter chartered by Justine Greening’s lot in the Department for International Development up to Chautara when quite honestly 2 bags of rice would have been more worthwhile cargo .

Amazingly the earth stayed still for all the time I was in Nepal. 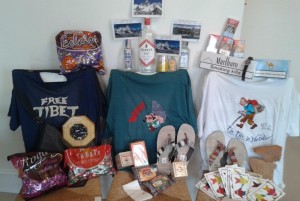 I came home bearing many fine souvenirs,  cigarettes for my children and sweets from Muscat for my charity’s stand last week at the Christian Resources Exhibition at ExCel.  Reaching my Wandsworth flat late on Sunday night, the 17th May,  it was so good to find a ’round robin’ letter waiting, with personal accoutrements to little me from Jean Vanier of L’Arche.  He has just come out of hospital but collected his $1.7 million Templeton Prize at St Martin-in-the-Fields last Tuesday apparently.  I always seem to miss him by a day or two !

Please consider how you could give something back to little Nepal whose Gurkhas have so helped us – donate maybe (see charity donation links above), or head out for a holiday.  Above all let’s hassle Cameron et al to get their act together,  stop pussy-footing around and get our Chinooks up to Kathmandu.

3 thoughts on “My trip to Nepal”