Apologies for ‘bothering’ you – I realize you are a busy man. Enclosed is a letter I sent you about 15 months ago. Your correspondence secretary, Andrew Nunn kindly wrote back on the 2nd June 2014 to say ‘I will draw his attention to your letter’ but possibly that never happened. Just to validate my credentials I have also enclosed a round-robin email concerning Jean Vanier with the other Andrew Nunn’s (Dean of Southwark Cathedral) reply above. And finally the last enclosure is the leaflet (and joining form) of the little charity I chair ‘Being Alongside’, The Association for Pastoral Care in Mental Health.

Regarding the latter; following an exchange of letters with your daughter Katharine, we asked her to become a Patron of BA/APCMH following the death of Stephen Sykes. Sadly she felt she would get too involved to the detriment of her own health so we secured Roger Royle instead – I do try and help Katharine, posting her helpful material and making comments on her inspirational blogsite – you must be very proud of her spirituality.

Regarding my original letter, not much further to report on Johnny Cameron who may escape prison and/or a large fine because of insurance. However, finally, after what, two years in limbo the situation at Farnham seems resolved. At the end of last month the on-the-run thieving vicar from Barnsley, Simon Reynolds, was at last convicted of pocketing £24,000 of fees intended for weddings and funerals. Just ghastly – and so unfair on local clergy who had to cover (and lie) for him. I was about to write again to the Diocesan secretary in Guildford when I learnt the news … he fled half way through the trial to Europe but I assume (always dangerous !) that he has been recaptured to face the music.

Saw Ed Creasy KS the other day who remembers you. Poor Ed went and broke his leg clambering over the Pyrenees from St. Girons a couple of weeks ago.

Sent by correspondence secretary,  Andrew Nunn to Justin’s ‘Executive Assistant’ to await his return from abroad.  But no reaction.  Apparently Rowan Williams was able to answer every single letter that came his way with at least a postcard – surely not beyond the whit of the current incumbent. Therefore we have to say:

It was a pleasure to meet you and Alister albeit briefly at the CRE event last Wednesday.  I am enclosing a small cheque in return for your tea-bag and biscuits.  Your names I found in your excellent accompanying pamphlet.

God knows why but I am writing to you on the penultimate piece of writing paper that I sourced in Eilat back in 1992.  It was me that joked ‘tongue-in-cheekily’ with Alister about Southwark being a finer cathedral than Durham although of course we do not have a bend in our river  –  and then I hope I handed you one of the enclosed leaflets about Being Alongside / APCMH the charity with which I am involved.

We very much hope to get our act together in time to participate in the CRE South event near Southampton on 27th November  –  we will struggle to produce enough promotional material by then,  but will try.  There didn’t seem to be any stalls up at Manchester with a particular ‘mental health’ flavour so I feel there is a place for us.

One of my tasks at present ( as new chairman ) is to develop a codicil template for people’s wills which seems a good way to fund-raise in the future.  Look at the work that Smiths’ Charities are now able to fund for example  –  their original benefactors are named in All Saints Church in Wandsworth.  I was wondering if SPCK had any documentation regarding wills and codicils that I could peruse ?  Please send any stuff you have to the address overleaf  –  thanks.

I shall be passing on extracts from your ‘Tea Break with SPCK’ brochure to Johnny Cameron who is working with prisoners and ex-offenders after his bad times at RBS and the ‘History and honey cakes’ article will be of interest to my friend Stuart Hall who has recently learned that one of his ancestors was the vicar on the Mayflower.

Stuart is helping me with my ‘blog’,  www.shirtyletters.com.  Please have a look  –  first perhaps at the two tabs top right,  ‘About Shirty Letters’ and ‘About the Author’;  then have a browse around the categories.  Being Alongside / APCMH gets much mention.

Once again,  very good to meet yourself and Alister and I hope we can cross our paths again soonest, 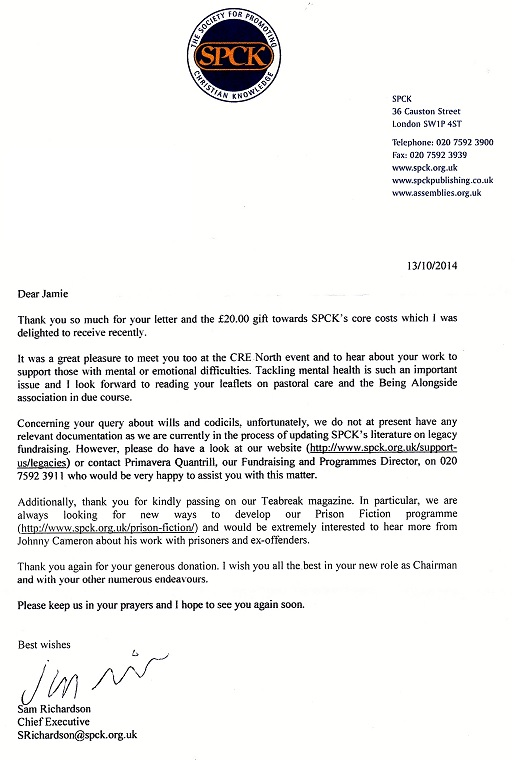 You may just remember my name,  Summers OS (RHH) – I may have fined you for ‘socking in the street’ or doing something inappropriate up Judy’s Passage.  Johnny Cameron ( Harrow, Christ Church) , my foursomes partner at Swinley tells me you once sold him some derivatives –  ‘World’s Worst Banker’ we dub him,  losing the UK economy some £13 billion –  I am now his self-appointed moral guardian ; trying to install a touch more humility into an Old Harrovian is a slow game.

Talking of humility … one gathers that when you were obliged to say a few words at one of those William Waldegrave  / Tony Little reunions in College Chapel you opened by saying, “ my career at school was only distinguished by its mediocrity”  We like that, Justin.  My year included such luminaries as Nicky Wells and Nicky Gumbel whom you will recall from your Holy Trinity Brompton days.  Funnily enough,  I named my first daughter Pippa (now 26) after the latter’s wife née Hislop.

Nowadays I worship at Southwark Cathedral where also funnily enough,  Roger Royle (one of our vicars at school) is due to speak this coming Tuesday 27th at the Public Forum on ‘A Lonely Society’ Is this our Fate ?’ –  starts at 7p.m. if you are at a loose end.

Because I sometimes attend the church in lovely Farnham,  I was going to write to you (copying in the Bishop of Guildford) about the situation there – the parishioners have been without a shepherd since before Christmas,  ostensibly because Simon Reynolds ‘was looking after his ill sister’.  It turns out this was a fib –  he’s out on bail accused of stealing funeral money from 700 families in Barnsley and maybe Farnham too.  Again funnily enough, my old nanny Glenys Phillips thought highly of the bloke and he attended her memorial service at St.Ffraid’s, Trearddur Bay along with Meurig Williams.  I think they both trained with little Leanne Roberts,  one of our current Canons at Southwark.  One hopes that Farnham Church will soon have someone better at the helm.

For my sins,  and after a disparate life mostly spent baking and mini-cabbing,  I have recently been appointed Chairman of Being Alongside/APCMH (Pastoral Care, Mental Health) –  they do great work and we have Stephen Sykes (ex Bishop of Ely) as our Patron (sadly died recently) . Justin,  perhaps our paths will cross one day.

No reply ever received from Justin

Letter to Nicky Gumbel, developer of the Alpha Course

No reply ever received

It was so lovely to see you both yesterday and to be given such a warm reception that I felt I had to put pen to paper. ( …. in fact one of my few remaining sheets of rather special writing paper, sourced in Eilat 21 years ago ! ).

What you two, + all the other Nickys have achieved is wonderful and wondrous. I sat upstairs in the gallery next to a Canadian catholic and her daughter – her son was just starting at Christ Church – who said there was nothing like Holy Trinity Brompton in her denomination. Your congregation was impressively diverse …. there was me expecting just Barbours and red cords!

Chacun a son gout of course and that musak isn’t my cup of tea along with the length of the service ( ! ), so I shall not be deserting my default Southwark Cathedral. Being an old-fashioned traditionalist I like the message to come rooted in the Christian calendar albeit with an up-to-date theme – for instance yesterday was the Patronal Festival of the Blessed Virgin Mary who little Leanne Roberts, the Treasurer at Southwark described as an early teenage pregnancy statistic who married a much older bloke ! Who am I to dare to suggest to someone who has brought 20 million people ( wow ! ) to Christ that perhaps perhaps a little mention of the Magnificat wouldn’t have gone amiss yesterday?

Some 18 weeks ago I dropped in at St. Mark’s, Battersea Rise ( where incidentally in early 1980 I experienced a ‘vision’ when it was a derelict wreck ) – there was a rather spurious ‘healing service’ being conducted by an overweight Canadian who kept going on about the Thursday night ‘Jive Night’ which was only £6 a ticket etc. I left the noisy band ( not as good as yours ! ) and the people using their mobile phones and waited for the vicar near the bookstall. He was flustered when I reminded him that Thursday was actually Ascension Day ( he hadn’t known this ). Apparently, for the next few days all the guy could talk about was Ascension Day ! Aren’t I awful !

Anyroads – once again, brilliant to see you both & looking so well. I would love you to come to supper maybe one evening soon – I shall only be in this house for perhaps 6 more weeks before moving on to becoming a ‘property spiv’ and hopefully ‘author’ of Henry Root-style stuff + somewhat spiritual Israel diaries 92, 95 and 2013. Your lives must be incredibly busy but it would be great to meet up for a longer chinwag ! All love –